A photographer with a Big Vision!

My visionary friend, Joe Sohm, spent thirty years traveling across America capturing images of with his camera. What drove his creative pursuit was one phrase, "How to you photograph Demoncracy?" He captured a historic, heartfelt portrait of all 50 states of America. Photographing American presidents to American homeless, from national monuments to small town America, Joe passionately explored and took tens of thousand of photographs. 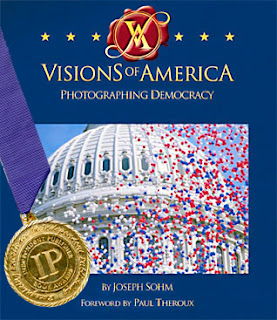 In 2009 Joe Sohn assembled his 30 years of images into an amazing photography book, Visions of America. Being a photographer of now four photo/essay books, I was impressed with his journey to create the images and in awe of his commitment to creating this 12x12, 312 page photo book! It is an extraordinary accomplishment and not a project for the faint of heart. But Joe's passion and inspiration doesn't stop there,  he felt called to create a photo symphony!

One of Joe Sohm's close friends is the talented composer, Roger Kellaway. Roger loved the idea of setting music to Joe's visual show of Americana photographs. Roger then brings into the project Allen and Marilyn Bergman (known for hit's such as "The Way We Were") to write songs for each segment, Clint Eastwood narrates the show telling Joe's story with Steve Tyrell and Judith Hill singing the songs. 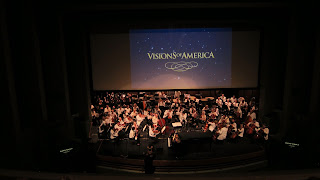 Tonight we were honored, and inspired to be in the audience of Visions of America for it's west coast premiere with the New West Symphony. What a beautiful concert filled with music that breaks your heart open and photographs of America that covers part of Joe's passionate journey that led up to this moment in time. It brought tears to our eyes and filled us with a rekindled love for our country.

I am grateful to Joe for his encouragement to create my last two books, publishing them myself through his designer, Peter Green. I watch Joe do such "outside the box" creations. Watching him take these huge leaps into the creative abyss makes me realize that anything is possible.

Yours in fearless inspiration,