...or if you think you can't, you're probably right. Oh, that Henry Ford...what a guy! Here's a man who was brought up on a farm, encouraged by his parents to tinker with clock in the kitchen and had only an eighth grade education. Most would look at him and say that, this is a kid going nowhere in life. He turned out to be the most influential man in the industrial revolution. 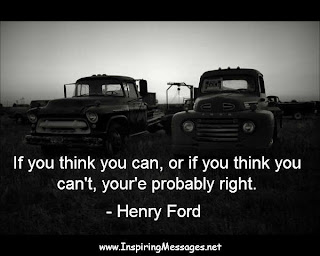 PBS had a really interesting documentary on Henry Ford tonight. If was educational and very inspiring. He fought for the common man at the very beginning and then later caught up in competition and egotistical accomplishments. We have much to learn from Henry. His story encourages us to think outside the box and  passionately follow your dream...your calling. However, he was not the greatest father and his son, seemingly much more sensitive and malleable, did not meet up to Henry's expectations. Edsel (an unfortunate car was named after him) died of an ulcer due to stress before he was 50 years old.

I suppose you can't change the industrial world and be a totally sweet guy, can you? The things I want to take away from this example is his perseverance and steadfast focus. I admire his ingenuity and fearless vision a changing world.

Looking at these historical figures, I am stunned by what they accomplished to shift the planet into the next realm.

So it's about vision, following your dream...your calling and going for it fearlessly, no matter what other's may say.