Fearless Women with a Purpose

For several months I have pondered what is next for Fearless Women? Should I back burner all that I put sweat equity, passion and pain into? My physical health break down and break through at the end of last year, gave me moments of enlightenment. Of course, just when you think the door to enlighenment opens, the wind shuts it closed. Damn that wind!

So I spoke to a few of my fearless friends to gather ideas and opinions on the subject. The questions were, "Do you think there is a hole that needs to be filled with another membership site and women's groups around the country? Where do you see it going?" What I got back at first are questions, "What do you want?" I just wanted suggestions. I wanted someone to flip the switch and light up my room on the subject.

At the end of the conversation, when everyone except one woman was on the call, Betty Liedtke, we discussed more ideas. She expressed such passion about being part of Fearless Women and what it meant to go to the event in LA last year. Then I thought, if I could bring purpose to it in the most simple form, I could do something meaningful and NOT burn myself out. 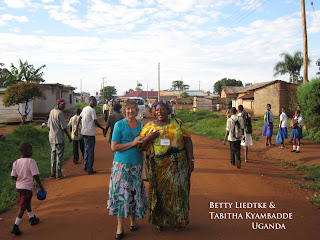 I revisited the inspiration I felt from these two women, Betty Liedtke and Tabitha Kyambadde. They met because of Fearless Women. Betty was in my Fearless Women, Fearless Wisdom. She spoke about being a fearless woman and being in the book at a Toast Masters gathering in Minneapolis. Tabitha who lived there but is from Uganda, was very moved. She later asked Betty more about Fearless Women. Long story very short, they became fast friends and Betty went to Uganda to help Tabitha with her mission to build a community for women and chidren who live in a slum brothel in Uganda. This village is to become "Miracle Village."

I was so moved by Tabitha's passion that I asked her to be in my newest book Fearless Women, Visions of a New World. I felt that Tabitha had a huge vision. 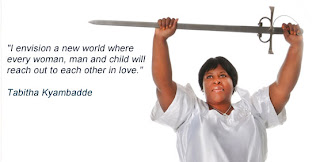 In the simplist most intimate way to carry on, I will be doing a webinar once a month co-hosted by another woman in my new book, Teresa McKee from Knoxville. We will be interviewing Tabitha and Betty about their passionate cause and give everyone a call to action to buy the new calendar, Fearless Women, Visions and Wisdom with Tabitha on the cover and all the proceeds going to build "Miracle Village." Every month we will feature a woman from either the books or calendar who have a passion to change the world! Yes, that feels very good!

Sometimes you have to surrender what you think you should do to find what just feels so so very right! Exhale....

I would appreciate hearing your comments about your fearless purpose!

Yours in Fearless Purpose,